You know that moment in Pocahontas where she’s standing on the cliff at the end and the wind rushes around her, and you think “No one looks that good when the wind blows their hair.” Well h

er looks aside, I can relate to that. No matter where I seem to go in the world, somehow the wind has a grounding affect. It always seems to find me. Ever present, but invisible. Constant; sometimes soft, and other times strong. I fancy it a good analogy for our Creator. Anyway, this evening I spontaneously decided to go on a walk because it was unusually nice outside. Most of time it is smoggy and the humidity falls on you like a sauna -and for those of you thinking Oklahoma is bad, multiply is by 10 and you have the climate of Chengdu- but thankfully it is beginning to cool off ever so slightly. While I was walking I began to grasp the reality that I am in China, and that many of you actually are on the other side of the world. Life as I know it is, really. However, as I walked around the lake and stole leaves from the bamboo a sudden gust of wind broke the usually still air of the Sichuan Basin and I was reassured that I am supposed to be here. I intend to make the most of it.

That being said I am finally settled in to my new apartment at Southwest Petroleum University. For those of you who are interested in knowing I will be enjoying the luxury of a western toilet due to the diligent efforts of the SAEIE staff. Otherwise, the reality of living in China is not as different as I imagined it to be. People speak a different language, but at the end of the day they are just people, same as anyone else. Kids cry the same, parents worry the same. Students study the same, well actually no, I think they study more. But they do buy groceries and cook and chat with people they know. I don’t really know why I expected it to be so different, and in some respects it is, but overwhelmingly the lifestyle is relatable. Although, people do stare at me a lot. I’ve been told that not many westerners come this far inland to China.

Rather than continue to ramble, I thought I might take some time to catch you up on life so far via photos! I have actually done a really horrible job taking them consistently, but here goes!

Last Thursday we visited the Sichuan Panda Research Base, and even got to see baby, baby pandas: 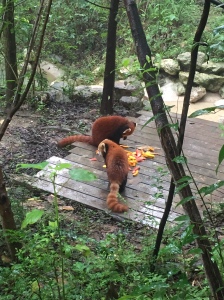 Immediately afterward we were treated to the most extravagant lunch I could have imagined. I have decided that I will be adopting the round-table tradition of China. The idea is that no one sits at the head of the table so you can chat with everyone. They even have this glass thing in the center that spins around the food, which eliminates the endless “Could you pass me the…?”

Then to top it all off we were set loose in Jinli, a revived district that was a combination of both old and new, but is now more of a tourist site than anything. 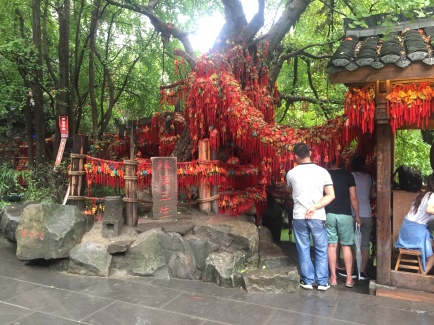 One of our interns fancied taking a picture with the frowning man in costume, then we all got up there to have our picture taken and much to our surprise, random people passing by took out photo like we were the main attraction. However, I was more interested in finding a place that did ear picking…like a local.

One final note: I now have a Chinese name: 杨乐乐 (Yáng Lèle, pronounced Yang Luhluh). It goes last name, first name. So the first name 乐乐 means “happy happy.” That’s me 😉 Apparently there is a famous actress that also has this name, so when I introduce myself in Chinese, they tell me it is a good name. I suppose it is because of her.

4 Replies to “A New Realitea”