Despite being on the opposite side of the world from China, I feel obliged to continue my story where I left off.

It was probably in a car.

It was in a car, and there was one thing in particular that was on our minds: chicken sandwiches.

Don’t get me wrong, Chinese food is great. Sichuan food is also amazing, when it isn’t drowning in spice and peppers. Tibetan food is even more fantastic because they still capture the flavor of the food when they use their spices.

Yet there we were craving a chicken sandwich like nobody’s business. We had been joking and laughing about our reactions to seeing a shop that sells one. It doesn’t matter how good the food around you is, a craving is a craving and we hoped we wouldn’t scare people when we found it. However, as usual, the joke was on us.

Upon our arrival in Ganzi we were aggressively bombarded by the all-too-familiar drivers shouting new destinations. Although this time they were pulling us out of the minibus. In our attempt to escape their barrage we almost forgot to pay our dear driver, who was actually worth his wait in gold on the treacherous Sichuanese roads. We arranged for him to take us to Seda in two days, and quickly set off up the road to find someplace to stay.

That’s when we found it.

Inside were long rows of tables and walls covered in pictures of food. We had trouble finding one to match our humble desire and ultimately settled on one that looked safe. The only trouble was it had two chicken patties, which didn’t seem worth complaining about.

As we ordered the lady happily chattered away about how she had been really worried that we didn’t speak any Chinese when she saw us. We laughed along with her and then sat down.

It didn’t take long for the food to come out, and we immediately dug in. Only halfway through did we start wondering what we were eating. There were three patties in total, one which looked like a vegetable mashup, and the other two some unidentifiable meat. We had just wanted chicken sandwiches…

We left that meal unfinished needless to say, and our stomaches reminded us for hours of our bad life choices. That said, we collaborated to make a decision we knew we wouldn’t regret.

It was time to hit the hot springs again. We had heard about these particular hot springs even before our arrival in Ganzi, as it was marked by the most ambiguous set of directions we had been given yet, which can be summarized as follows: turn down the sketchy alley that smells like feces, once you pass that smell follow the smell of sulphur.

The afternoon continued lazily as we took our sweet time at the springs and eventually continued on to a tea shop on the edge of town. I ordered the usual for the two of us, and sat down only to experience the most intensive staring treatment yet from the shop owner and her daughters. Alex wasn’t too bothered as we talked about the blatant attention we were receiving in front of our viewers. My first impression of this town hadn’t been great to begin with, and the chicken sandwich/staring combo wasn’t helping.

I focused on updating my log book making occasional attempts at conversation until we left. The dirty back roads were lit with the dying orange hue of the sunset as we worked our way back to the hotel. I told Alex the only thing I wanted to do before we left was hike up one of the low hills to see the sunset the next day.

That’s exactly what happened. We spent the entirety of our next day lazing around the hotel. Leaving only once to grab a bowl of noodles before we headed for the hills…literally. As we walked I worried that we were going to miss the sunset, as it had been cloudy all day.

Nevertheless, we kept trekking without delay or distraction.

Okay, we might have had a few delays as well as a few photoshoots. Even our backpacks got some glory shots. 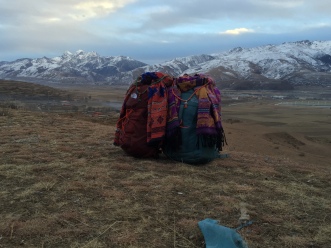 Thinking that we had seen all that there was of the sunset we began our walk down. That’s when it happened. Suddenly the sky was ablaze with rays of orange fire that shot like swords through the sky.

Thus concluded our time in Ganzi. While it was not my favorite town, it was a moment. One I won’t soon forget.

“If life were made of moments, even now and then a bad one.

But if life were only moments then you’d never know you had one.”

From Into the Woods (the movie)